Her 98th birthday is with the Lord

Grandma would have turned 98 today.

Here are some notes I took from our phone calls over the years:

She loved going to Grandma Ferns house for Thanksgiving.

She talked about exploring the hills when she was a little girl, as Bob and I did when we were kids.

She would sleep in bed with her folks, who didn't bother with a cradle.

She said her dad only had a fifth grade education, but he kept learning his whole life and would teach the kids all sorts of things.

She said that her grandfather died and left Great-Great Grandma Amelia Ferns alone to raise their children.  She never remarried.


I imagine the angels are celebrating her birth today. I'm absolutely certain there's a lot of music involved.

Posted by Rich Swingle at 6:13 AM No comments:

I’ll start with an apology for not putting the date of this memorial in the first issue of Mom’s obituary in the Medford Mail Tribune. To those of you who called and came out on Thursday, I’m truly sorry. I’d also like to add a big thank you to Jackson House and their staff for all of the fine care and home-like atmosphere they have given Mom over the last few years, and for inviting us to hold this memorial here.

How do you talk about a 97 year old person’s life when you only lived with her for 18 of those years? I can’t do that, but I can talk about growing up under her care. Little did I know that when I headed off to college at 18, I would not come back as the boy that left, but as a grownup. Mom had prepared me well for that change and I didn’t realize it at the time. Memories fade, but as I look back over my early years, especially after having had children of my own, I can see part of the plan Mom worked to prepare me for adulthood. I probably wouldn’t have passed 1st grade if not for her. I missed about a third of the school days with bronchitis and she consistently kept me up with the necessary homework so I wouldn’t fall behind.

I think that she believed that children learn and grow most efficiently through their own experiences. I’ll illustrate with a few stories.

One day when I was very young, I think before school age, Dad and Uncle Ralph were filling the tractor with gasoline. My brother and I were fighting over who could get the closest to the fill nozzle to smell the fumes. Since he is six years older than me, he won and I fell off the back of the tractor, landing head first on the hitch. I remember coming to my senses in Uncle Ralph’s arms as he carried me back to the house to Mom. There was blood all over his shirt, and I was bellaring at the top of my lungs. Mom looked over what I assumed to be a large hole in my head with brains hanging out, and put a BandAid on it. I thought how could a BandAid hold my brains in. Of course not long afterward I was back up to speed as if nothing had happened. The lesson: Falls are a regular part of life, don’t make a big deal of it and get on with life.

When I was grade school age, one day I thought it would be a good idea to smoke a pipe. No one in our family smoked anything, so there was no pipe to be had for this experiment. So I built one out of a piece of an old hickory shovel handle and some copper tubing, loaded it up with sawdust and lit it up. My tongue burned and my mouth tasted bad. Mom asked me what I was doing, as if she didn’t know, but didn’t suggest that I stop. I tried some dried weed seeds and got the same burnt tongue and a different bad taste. After a while I decided that pipe smoking wasn’t for me and thus ended my smoking career. The lesson: It’s easier to keep true to decisions you make for yourself than those others make for you.

When I was high school age, I was experimenting with different rocket fuels for homemade model rockets. One concoction contained a synthetic rubber that needed to cure before firing. I decided to use Mom’s electric fry pan to speed up the cure a bit, but got the temperature a bit too high and the motor ignited, raced around the living room and burned a large black spot in the baseboard. Mom informed me that I needed to move my operation outside of the house. I moved the operation outside of the house and made a few better thought out changes to my procedure. The Lesson: Think things through before you do them and own the consequences of your actions. Wouldn’t it be great if the politicians learned that lesson?

As you all know, Mom was a schoolteacher for a great part of her life. She taught first grade most of the time that I was around, but after I had grown, she switched over to resource teacher. I think that put her in more one-on-one situations with students that needed extra help. I remember her telling about one student that had a great deal of trouble writing numbers and letters. She worked and worked until she discovered that this person could draw a half circle on the left and a half circle on the right, but couldn’t make his hand go across his body to draw a full circle in one motion. She took him to the black board, took his hand and started drawing circles until he could do it himself. It took quite a while but eventually he overcame his problem and became able to write numbers and letters. The lesson: Don’t give up! Keep trying until you find what works, and use it.

A person makes many choices in life, but we can’t choose our parents. Well, I lucked out big time because I couldn’t have picked better parents if I had had all the resources in the world available to me. If the world were filled with people that had the intelligence, tenacity, patience, independence, and love that my Mother had, it would surely be a better place.

Fred Swingle
Posted by Rich Swingle at 10:08 AM 1 comment:

Posted by Rich Swingle at 9:30 PM No comments:

To the Family of Alice Swingle,
I am so very sorry for your loss.

Mrs. Swingle was my first grade teacher and one of the nicest, most caring people I have ever had the privilege of knowing.  My mother, now passed, (Evelyn Davis) was a second grade teacher and a friend of Alice's.  It was nice for me to be able to see her through the years as I would come to see my Mom.  She always had a beautiful smile for me, for everyone.

I remember her classroom,  our "reading lessons", the felt board with the letters and animal cutouts we could play with.  She was a wonderful teacher, a wonderful person who will, I'm sure be missed by many.

May God comfort you and give you strength in this time of sorrow.
Sincerely,
Sherry Davis Rowberry
"Unable are the loved to die.  For love is immortality"
{Emily Dickinson}
Posted by Joyce Swingle at 8:46 PM No comments:

I met Alice while visiting with Pastor Jim Larsons.
She was sure a kind and friendly lady! She was a blessing to be around.
I'm glad to have had the joy of being able to visit with her!
Respectfully,
Cindy Page
Posted by Joyce Swingle at 10:28 PM No comments:

Joyce and Rich,
I mentioned on Rich’s Facebook post that my mother has been working on a Photo book and slide show for the Phoenix Historical society on the 100th anniversary of the opening of the Fern Valley school. My mother has indicated when she completes the presentation she will put it on a DVD and I will be sure and send you a copy. In the meantime she has sent a copy of a 1923 school picture that included Alice. I missed being at the service yesterday but my Mother and Brother said it was a very fitting tribute.
You are all in my thoughts and prayers
Dale 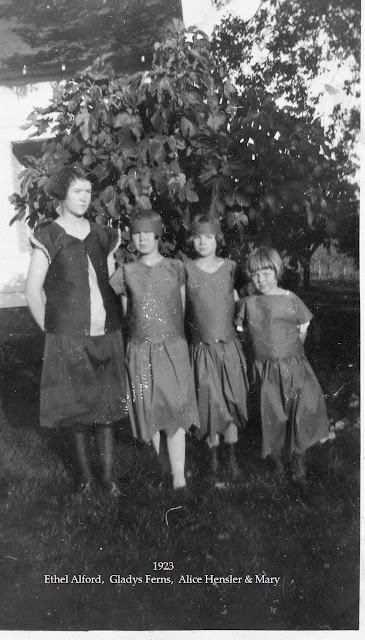 Posted by Joyce Swingle at 10:26 PM No comments:

Here are links to some of the things Rich mentions in the sermon: Posted by Rich Swingle at 4:02 PM No comments: